Universal Lessons from an African Urbanist 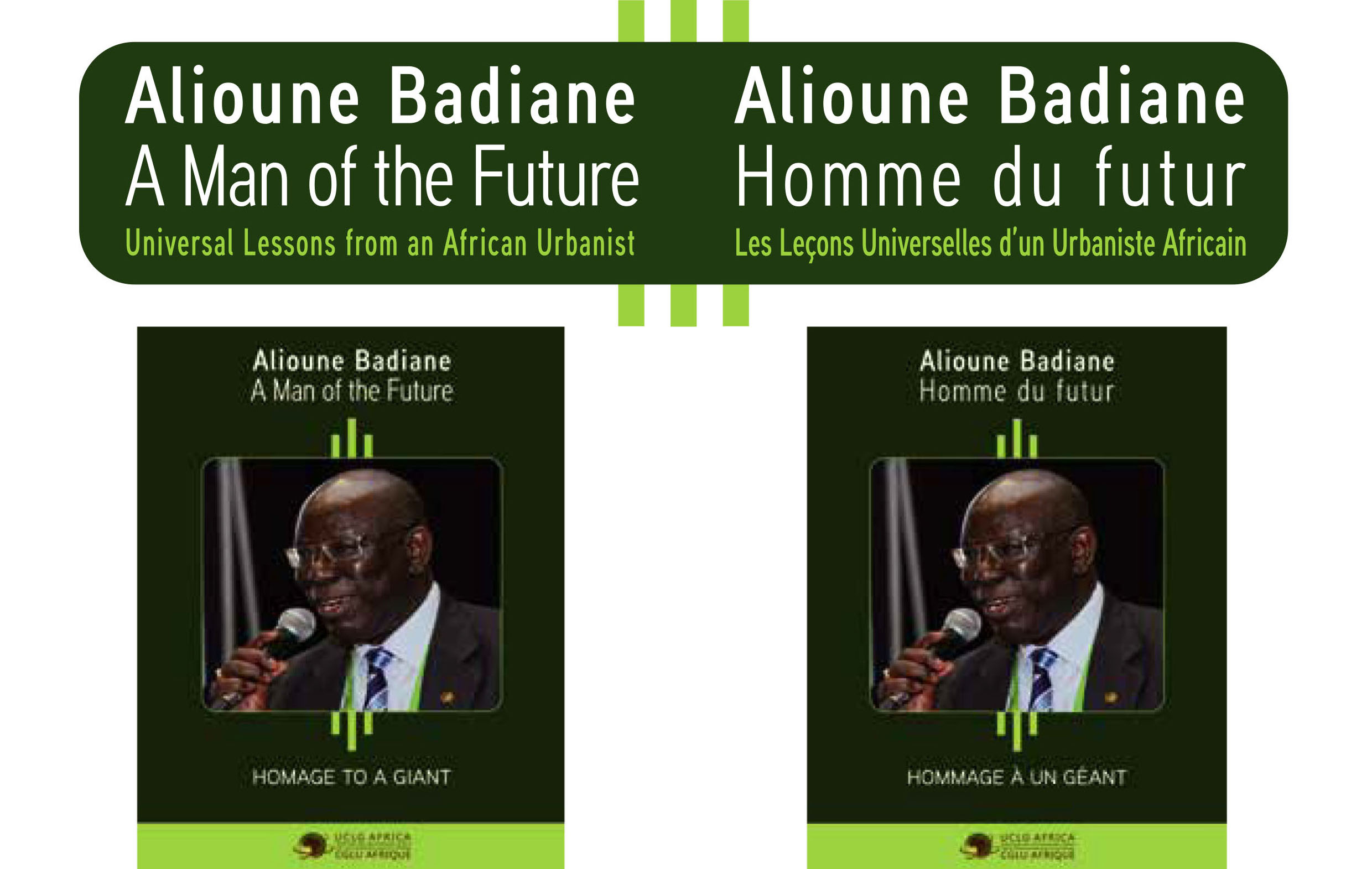 Alioune Badiane was not yet 66 years old when he left us on 31 July 2020 in Dakar, swept away by the Covid-19 pandemic. A brilliant international civil servant, Alioune was for two decades one of the most influential Directors of UN-Habitat, the United Nations City Agency. He was an urban planner who dedicated his life to improving the living and housing conditions of underprivileged populations and to the sustainable development of African cities.

Coordinated by Daniel Biau and Jean-Pierre Elong Mbassi with inputs from 48 colleagues, former colleagues and friends of Alioune, from 25 nationalities, the book “Alioune Badiane, a Man of the Future” is structured in six chapters comprising 20 articles that cover all dimensions of urban and housing policies and practices. It highlights the legacy of brilliant African leader whose professional achievements should guide future generations of mayors and ministers, for the benefit of the women, men and children of Africa and beyond. It also resurrects 30 years of intellectual and political debates and paradigm shifts, to the benefit of international development experts and urban specialists.

Our book constitutes a tribute to a great leader who embodied the values of the United Nations, values not only of professionalism but also of objectivity and respect for diversity. Above all it aims to highlight and preserve important messages that Alioune shared with his colleagues, many of whom were keen to celebrate his memory through a collective work.

To our knowledge, this effort is unprecedented in the history of the UN. Biographies of charismatic leaders such as Dag Hammarskjöld or Koffi Annan have been published, but never before has such a collection of testimonies in memory of a departed colleague been brought together by his peers, by those who knew him intimately and appreciated such a lasting and stimulating interaction.

Alioune was a development pioneer and a pan-Africanist. He had studied on three continents and wanted to learn from the entire world. He was a convinced municipalist who worked at the Municipality of Dakar, in the Urban Development Department, before joining UNCHS(Habitat).

Our points of view converged, mixing optimism and pessimism. While talking about cities, we often elaborated on our favourite analogy between the human body and the urban body, two extraordinarily complex systems that require multifaceted interventions. In May 2020 we exchanged our articles on Covid-19. His, “Pandemics, Coronavirus and Urban Resilience in Africa” had been published on 17 May; mine, “The Urban Challenges of Post-Covid-19 in Africa” was published four days later. Written simultaneously but without any consultation, they reveal the concordance of our thoughts.

Our last encounter took place at the World Urban Forum in Abu Dhabi in February 2020. While visiting the Sheikh Zayed Grand Mosque, we remembered the first Urban Forum held in 2002 in Nairobi. Together we have fostered and experienced two decades of international exchanges on urban planning and management, involving a total of more than 100,000 participants.

In memory of Alioune, we have now passed on to new generations of urban planners a number of chapters that address almost the entire spectrum of UN-Habitat’s work. They offer a panorama of the various facets to be considered when dealing with “human settlements”. They cover urban and housing policies, the urban environment, territorial planning, municipal management, disaster response, the impact of climate change, the importance of analysis and partnerships, and of course the need for leadership. In this book readers will find the spirit and the commitments of a leading colleague, and will learn of his struggles for fair, sustainable and inclusive development, struggles that we all shared and continue to share. These lessons are not only valid for Africa but for the whole world.

Through the book chapters

There are several ways of thematically dividing our action areas. We have sought to adopt the simplest and most logical structure, keeping in mind that urban policy must intelligently articulate different components, act on all sides, and not ignore any social, economic, environmental or cultural aspect. Just like the human body, the urban body requires both generalists and specialists.

The first chapter (From Dakar to Port-au-Prince) describes how the career of Alioune combined a constant interest for his home country, Senegal, with his international duties. His professional life started as an urban planner in Dakar, first at central government level, then in the local government. The chapter also describes how he was recruited by the United Nations in 1991 for a posting in Haiti. Alioune would work with UN-Habitat for 25 years.

The second chapter (Planning and managing urbanization) provides a comprehensive view of various fields of expertise that characterized Alioune Badiane as a multifaceted urban specialist. In the 1990s Alioune was the regional coordinator for Sub-Saharan Africa of the largest multilateral programme on urban matters, the Urban Management Programme (UMP) which associated UNDP, UNCHS and the World Bank. This programme identified the main challenges to be faced by African cities and initiated a continuous capacity building process which is still on-going. In the following decade Alioune was the Director of UN-Habitat Regional Office for Africa and focused more on urban planning and urban safety. He frequently insisted on the importance of a proper planning of city extensions in a rapidly urbanizing continent. In the 2010s the need for renewed national urban policies emerged and again Alioune took the lead, not only in Africa but in other developing regions as well.

The third chapter (Housing the planet) focuses on one of the most basic and pressing needs of human beings, adequate housing, which should be viewed both as a need and as a human right. Alioune took an active part in the worldwide advocacy campaigns of UN-Habitat to promote housing for all, particularly to improve the living conditions of hundreds of millions of slum-dwellers. Key in this regard was the adoption and enforcement of progressive land regulations, to ensure both tenure security and adequate densities. Alioune was a determined advocate for the urban poor, advising and challenging Ministers and Mayors all over the globe to better address and tackle urban poverty and inequality.

The fourth chapter (Responding to challenges) deals with two broad categories of problems: the deterioration of the urban environment and the impact of natural and human-made disasters on city life. The quality of the built environment has been a major concern of Alioune since his time as UMP regional coordinator. He promoted a proactive environmental planning and management approach that was applied to over 100 cities across the world. Waste management and energy efficiency were important components of this approach. Alioune also led the efforts of UN-Habitat on adapting cities to the impact of climate change, as exemplified by the recurrent floods in Senegal and Mozambique. He was equally involved in many post-conflict programmes, from D.R. Congo to Somalia or Iraq, associating physical reconstruction with the rebuilding of institutional, legal and individual capacities.

The fifth chapter (Knowing cities) shows how Alioune always tried to understand urban dynamics as a basis for all actions, from policy reforms to concrete slum upgrading projects. Politically he was convinced that local authorities had to play a much greater role in urban planning and management. He strongly supported their national and international associations. He was also passionate about urban data, statistics and indicators which in most countries remain insufficient, outdated, or inaccurate. He advocated the setting up of urban observatories at various levels. Among his main legacy is the series of biennial reports on “The State of African Cities”, whose first issue was published in 2008. These comparative regional reports complement the global World Cities Report and the national reports that governments are committed to produce. They are essential to guide urban and housing policy development and to support international exchanges.

The final chapter (Facilitating and advocating) is about sharing best practices and policies with all actors and supporting civil society organizations, in particular women associations. Alioune was used to negotiate with governments and to build consensus around UN priorities. In addition he worked with a number of NGOs to make sure that UN-Habitat was more than an inter-governmental body, and was addressing the real needs and aspirations of the people. Finally the chapter describes the management and leadership style which was a trademark of Alioune, made of multiple interactions, mutual respect, integrity, and shared commitments. Alioune was an internal facilitator as much as an external advocate.

“Alioune Badiane, a Man of the Future” is published by United Cities and Local Governments of Africa (UCLGA) with a foreword of the Executive Director of UN-Habitat, Ms. Maimunah Mohd Sharif, and a postface of Jean-Pierre Elong Mbassi, Secretary General of UCLGA. Jean-Pierre and I have been both colleagues and friends of Alioune for three decades. Thanks to this book we hope that Alioune’s memory will enlight our future, in the cities and neighbourhoods of Africa as well as in the rest of the world – not just in our libraries, but in our imaginations and in all our common endeavours.

To order the book you can fill out and send this order form: order – commande

Daniel Biau is a Civil engineer, Urbanist and Doctor in Social Sciences. Born in France, he has worked during 23 years for the United Nations, including as Deputy Executive Director of UN-Habitat. He founded the World Urban Forum in 2002 and has published many articles on urban and housing policies (see danielbiau.webnode.com).

Alioune Badiane a Man of the Future – An essential book
Tagged on: Africa    SDG11    Sustainable Development